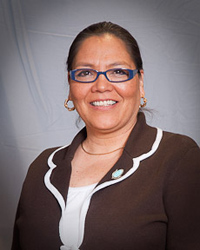 Connie Bear King is an enrolled member of the Standing Rock Sioux Tribe. Ms. Bear-King’s experience includes being a lead consultant for the National Resource Center for Tribes (NRC4Tribes.)

The NRC4Tribes provided training and technical assistance to tribes and/or state child welfare agencies. Prior to becoming a consultant with the NRC4Tribes she was the Director of Community Development and a Government Affairs Associate for the National Indian Child Welfare Association (NICWA.) She lived and worked in Sioux City, Iowa as the Executive Director for the Sioux City Office of Indian Education. Ms. Bear King grew up in San Francisco where she served as a Commissioner of the Human Right Commission while working at the University of California San Francisco. Ms. Bear King served in a variety of national, state, and community leadership positions. Ms. Bear King was elected to the board and served as co-chair of the National Association for Community Mediators. By appointment of Iowa Governor Thomas Vilsack, Ms. Bear King served on the District 3B Judicial Nominating Commission and on the Child Advocacy Board (CAB). Her committee memberships include co-facilitator for the Community Initiative for Native Children and Families (CINCF) in Sioux City. In 2003, CINCF, advocated for the passage of Iowa’s Indian Children Welfare Act. In 2005 she received the Women Aware Award for “Women Taking Risks,” and in 2007 she received the “Chief War Eagle” Award from the Sioux City Human Rights Commission. In 1995 she received the Civil Rights Leadership Award from the California Association of Human Rights Organizations (CAHRO.)

Spaulding for Children is the lead agency for The National Quality Improvement Center for Support and Preservation (QIC-AG).

Funded through the Department of Health and Human Services, Administration for Children and Families, Children's Bureau, Grant #90CO1122-01-00. The contents of this website do not necessarily reflect the views or policies of the funders, nor does mention of trade names, commercial products or organizations imply endorsement by the U.S. Department of Health and Human Services. This information is in the public domain. Readers are encouraged to copy and share it, but please credit Spaulding for Children.